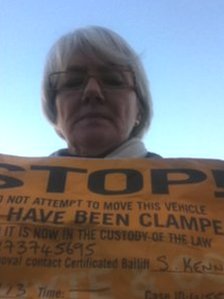 A cautionary tale on the dangers of stopping on a bus stop, even for a period of seconds.  The BBC reports on a motorist in Essex who stopped for around 8 seconds to drop off her father and was caught on CCTV.  She refused to pay the £35 PCN and continued to refuse after her appeal was rejected.  It escalated to the point where the local council were able to register the charge as a debt and call in the bailiffs.

This resulted in her car eventually being clamped, and her £35 initial charge had become £695 to remove the clamp and recover the vehicle.  In a strange twist, it appears that someone removed the clamp and she was able to drive away:

“When I got back to the car the clamp had gone,” she said. “I was quite cheerful and drove off. I thought the council had removed it.”

The bailiffs disagreed however, and reported the clamp to the Police as stolen.  The council have promised to review the situation but until then she is technically still liable for the full payment.

One of the main issues here is that as petty as it sounds, if stopping at a bus stop is not allowed, then it doesn’t matter how long you stop.  As the driver basically admits she committed the offence, the council don’t have much leeway.  If they allow one driver to stop then the floodgates open for everyone else to do the same, citing this as an example.

The BBC are now reporting that Southend council have offered to let the driver pay the original £70 within 14 days, otherwise she will remain liable for the full bailiff charges.  The driver however has apparently refused to pay ‘until ordered to do so by a Tribunal’.

“The council has acted correctly and lawfully throughout this whole process, but in recognition of the fact that Ms Hatton appears not to have understood the appeal process fully we are prepared to give her 14 days to pay the original £70 fixed penalty notice and will then take no further action.”

The council however are completely right in this instance and the driver is going too end up paying for her ignorance of the appeals process.  If she wanted it to go to Tribunal she had two chances to request this but hasn’t done so and once the bailiffs have a warrant, they are legally allowed to attempt to recover the debt.